In the moonlight n°9: Kangaskhan

In the moonlight n°9: Kangaskhan 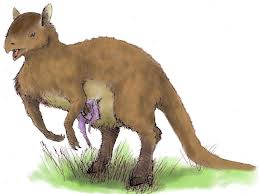 Kangaskhan is a rare Gen1 Pokemon available in the Safari zone only. From a female-only species, this Pokemon is well known for her strong bond with her baby which led to a one-of-a-kind mega-evolution in X and Y. Kangaskhan is a Pokemon that never evolves and is still powerful with a 490 base stat total, and I have to say she has a good stat spread: base HP 105, base attack 95, base defense and special defense 80 each, speed 90, special attack 40. Basically, Kangaskhan is a polyvalent Pokemon: she has decent speed, good bulk, decent attack and a low special attack as she doesn't need it anyway. She can learn various types of offensive moves such as Outrage, Aerial Ace, Aqua Tail, Double-Edge, Power-up Punch, Body Slam, Brick Break, Crunch, Sucker Punch, Earthquake, Counter, Reversal, with various effects. The down side is that she also learns Blizzard, Thunder and Solar Beam with a low special attack.
Kangaskhan has access to three good abilities: Early Bird (wakes up twice as fast ), Inner Focus (never flinches) and Scrappy (normal and fighting moves can hit the ghost type), with the best ability being Scrappy, for a set I'm about to detail.
Kangaskhan may be NU (that's a shame for a Pokemon with such potential), she has a mega-evolution so powerful it moved up straight to Ubers. Her stats are still well spread, with a 125 base attack, 100 base defenses (both) and speed, the down side being a +20 in special attack and that stat remains mediocre. What makes Mega-Kangaskhan a real threat is her signature ability, Parental Bond: offensive moves hit twice, the second hit has half its power. It's basically the baby that fights side-by-side with the mother. Just imagine hitting twice in one turn with Power-up Punch. Now, with Return. Now, with Sucker Punch. Well, this is why she went to Ubers and I need to say it's justified. Also, that ability is a nightmare to whoever runs Weak Armor.

How to play that Pokemon? 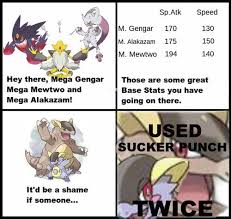 Regular Kangaskhan: NU tier. I recommand Scrappy to deal with ghosts. The first set I tried was (a year ago) Fake Out, Return over Double-Edge (still hurts a lot without recoil), Sucker Punch just in case. My fourth move was either Power-up Punch of Counter. You can also get Outrage, Earthquake, Drain punch, Hammer Arm, it's up to you. My item was assault vest, hence the lack of healing moves other than Drain Punch. You can also get a lum berry to avoid status, or run Facade in case of burn (power raises up to 210 with normal STAB). If you play Kangaskhan in RU you can face Spiritomb and then you'll need both Scrappy and a counter to burns. 252 Atk, and either 252 HP with adamant or 252 Speed with jolly.
A set I have yet to try but find interesting is a Scrappy Rest/Talk. Power-up Punch to increase your attack, Return to deal havy damage. Rest to last and cure from a burn, Sleep Talk to keep attacking while asleep (2/3 chance with that moveset). With Return and Power-up Punch you have perfect neutral coverage, completed by Scrappy that hands you ghost types on a plate. I don't know yet what is the best item fot this set, I'll try leftovers first, then custap berry to give priorty to Rest in case of emergency. About the EV, 252 Atk with adamant nature and 252 HP, for a Rest/Talk set requires bulk. 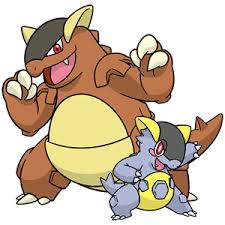 Mega-Kangaskhan: Uber tier. No surprises there, she's bound to fight the likes of Blaziken, Mega-Lucario, Mega-Gengar and the legendaries. Of course avoid sending Kangaskhan against Blaziken, Lucario, Mega-Mewtwo-X. Mega-evolve from the start then open with Fake Out, you will hit twice for free. Then, people usually set up with Power-up Punch. Keep in mind Parental Bond enables Power-up Punch to raise your attack TWICE in the same turn. Then Mega-Kangaskhan sweeps with double Return or double Sucker Punch. If you want some coverage, feel free to replace Sucker Punch with one of the physical moves listed above. For example Drain Punch would be really interesting with Parental Bond. Earthquake twice in a turn is also an option considering Primal-Groudon, Zekrom, Reshiram, Dialga, Mega-Gengar and Aegislash.


To deal with Mega-Kangaskhan in Ubers, send something fast that resists to dark and does enough damage. A Darkrai should be fine (don't use Dark Void, it can miss, attack from the start). You also have Ditto to copy its stats (yes Ditto is viable in Ubers). Yveltal with either Sucker Punch or Oblivion Wing can do serious damage to Kangaskhan, and if she still wins you have Extreme Speed from Arceus. Mega-Blaziken and Mega-Lucario can also OHKO her, and don't forget Mega-Lucario's typing that resists both Sucker Punch and Return (but not Power-up Punch).
Kangaskhan may be underrated in her regular form but Mega-Kangaskhan is a true monster. Parental Bond doubles the effect of Power-up Punch, raising her attack by two stages in one turn, enabling her to attack at double power in the next turn... twice. Hitting twice with a priority move makes it about as dangerous as Talonflame (and this guy is STILL not Uber, go figure). Not to forget that Parental Bond also doubles your chances to get a critical hit. If you want to try Shadow Claw on Kangaskhan go ahead, that can be nice. Thankfully Kangaskhan doesn't learn many multi-hit moves, and as her Parental Bond ability is only available through a megastone you can't combine it with a king's rock. That would be really unfair and unbalanced. She may be a threat, but there are reliable ways to stop her. Now only one question remains unanswered: 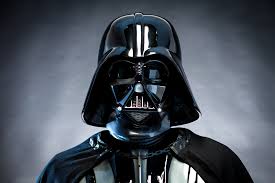 Who is the father?


By Champion Blackwolf. I don't own the pictures. Next topic: Zangoose.

Re: In the moonlight n°9: Kangaskhan

I can't answer that question